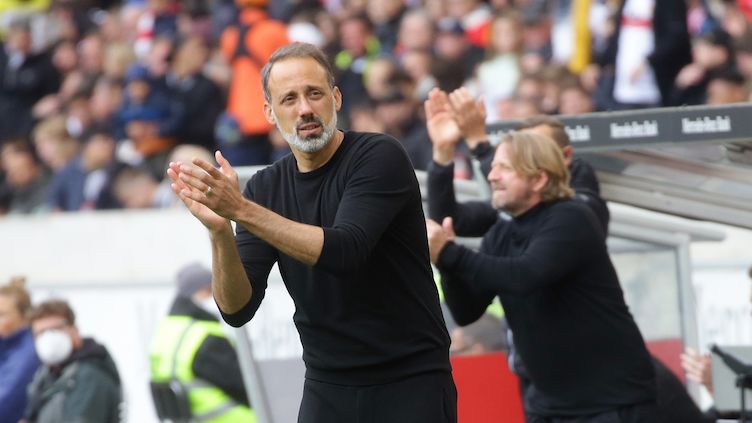 “Tackling the task together”

VfB will be looking to maintain their chances of staying up directly when they host 1. FC Köln on Matchday 34.

The VfB players need no extra motivation for Saturday’s sold-out home match against Köln. “We’ve suffered a lot of setbacks this season, yet we still have the chance to achieve our target on the final matchday,” said Pellegrino Matarazzo in Friday’s press conference. “We’re going into the game with the feeling that we can only win. We want to do everything we can with our performance to get the three points and maintain the chance of staying in the league directly,” continued the VfB boss. His side need a win against the Billy Goats to have any hope of reaching 15th place and outright safety. It would then rest on Hertha BSC’s result at Borussia Dortmund.

Köln, currently in seventh place in the table, already secured a place in European competition last weekend, but a victory here could see them climb up to sixth.

Matarazzo is paying particular attention to the opening period of the game. “We need good intensity on the pitch at the start. For us it’s important that we start well, similar to how we did in Munich. We’re tackling the task together,” he added.

Philipp Förster has been ruled out of Saturday’s match due to a stomach bug. Hiroki Ito has been unable to train in recent days because of a calf problem but was expected to return to full training on Friday, while Daniel Didavi is nursing an Achilles problem and hasn’t been able to train with his teammates. The match comes too soon for Mohamed Sankoh, Silas and Nikolas Nartey.

Facts and figures on VfB’s final Bundesliga game of the campaign at home to 1. FC Köln at 15:30 CEST on Saturday.