Facts and figures on VfB’s final Bundesliga game of the campaign at home to 1. FC Köln at 15:30 CEST on Saturday.

The Billy Goats don’t take much persuading to go for goal, registering 449 attempts over the course of the current campaign.

Köln have conceded just four goals from crosses this season – fewer than any other team in the league.

Thirty-four-year-old striker Anthony Modeste has proved a thorn in VfB’s side in recent years, scoring six goals in his last seven appearances against the boys from Cannstatt in all competitions.

VfB’s primary focus this weekend is on their own game, but if Borussia Dortmund win against fellow strugglers Hertha BSC – whose goal difference is vastly inferior – Pellegrino Matarazzo’s charges can secure their Bundesliga status for next season with victory against Köln.

VfB will be sporting their new 1992 edition kit. 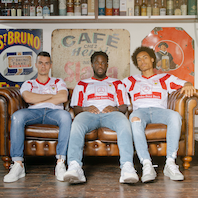