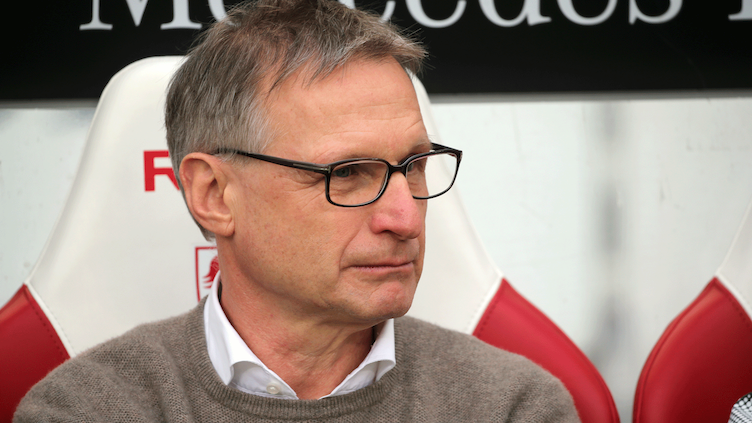 "In the thick of the preparations for the coming season"

VfB‘s Sporting director Michael Reschke spoke in an interview about the current planning and transfer rumours, which don’t really concern him.

The national teams are getting ready for the World Cup, the rest of the VfB players are on holiday and there is a distinct quiet around the training grounds on Mercedesstraße. However, the activity continues at the VfB Clubzentrum.

Mr. Reschke, are you enjoying the peace and quiet at the end of what proved quite a successful season?
Michael Reschke: "Peace and quiet is a relative issue. There is no real stop in football. I am very happy that we could announce Atlético de Madrid as our test-friendly opponent for the 'Tag des Brustrings' on August 5th last week. During such a phase, you have the opportunity to do the things that otherwise fall a little short. For example, last week I met with Christian Gentner for two hours to have a meal and my phone barely rang. There are no end of issues though and we are now right in the thick of our preparations for the coming season.“

Which issues are currently on the agenda?
Michael Reschke: "I’m watching a lot of the friendly games taking place prior to the World Cup and of course also keeping an eye on our players. We were absolutely delighted to see Berkay Özcan make his 'A' international debut for Turkey. He deserved that and it’s a real acknowledgement of our youth work. In addition, I am holding a lot of talks. We are currently involved in some very promising exchanges with Greuther Fürth concerning the future of Julian Green. I expect we will find the right solution for all involved and that Julian will remain in Fürth."

Are there further personnel issues which you are dealing with at the moment?
Michael Reschke: "Red Bull Salzburg made it clear to us that they would very much like to extend with Jérôme Onguéné. We will conclude those talks soon. Hans Nunoo Sarpei enjoyed a successful season with FC Senica and they would like to keep hold of him. However, there are others interested in signing him, so we are holding discussions with other clubs and the agent too."

Is there anything new about Tobias Werner?
Michael Reschke: "Tobi will not be staying with 1. FC Nürnberg. We will sit together with him soon to see how his future plans are looking."

You announced a number of new signings immediately at the end of the season. Can we expect any more news on possible signings?
Michael Reschke: "We are naturally still active on the transfer market and our planning is most certainly not completed."

Will there be an extended collaboration with Holger Badstuber?
Michael Reschke: "I am still in contact with Holger. He would like to play internationally again and has an eye on the market, but our door remains open for him."

During the Bundesliga break, the rumours never stop. How would you evaluate Benjamin Pavard’s comments on remaining at VfB?
Michael Reschke: "I am very relaxed about that. The statements he made are absolutely fine. That’s the manner in which we have held our talks. He had an exceptional season for VfB and it’s clear that he is in the focus on the international top-clubs. We are in constant exchanges with Benji and his agent and we are well aware of what’s going on. In extending his contract, we naturally spoke about his career planning. We’ve discussed the national team, the Champions League and that it’s our mutual focus to have him play at VfB next season. We expect that to be the case – there have been no offers, no talks with other clubs and there’s no change to the situation."

Then you’re not losing any sleep about the rumours surrounding Daniel Ginczek?
Michael Reschke: "Absolutely not! There is nothing new at all about Daniel. He is in very good physical condition and had an exceptional latter half to the season. We are happy to have him in our ranks and we are planning with him for the new season."