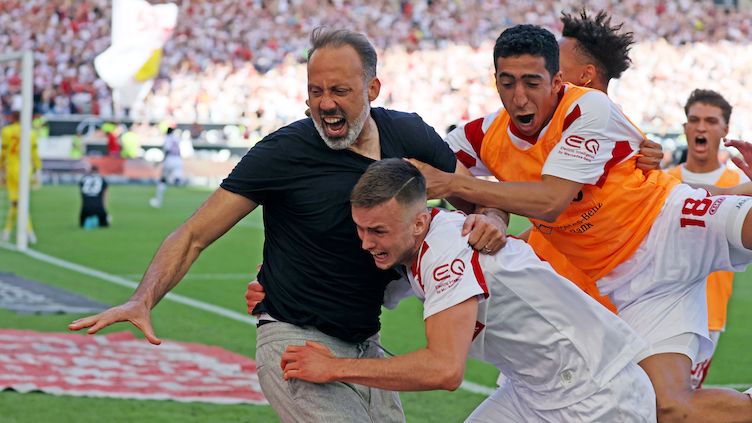 We are staying up!

VfB Stuttgart clinched Bundesliga survival in the most dramatic fashion with a late 2-1 win at home to 1. FC Köln.

At the end of a dramatic final-day Bundesliga encounter, the 60,000 fans, the team and all the VfB officials linked arms. Wataru Endo’s goal in the second minute of stoppage time secured a 2-1 win and Bundesliga survival for VfB, as rivals Hertha Berlin lost 2-1 in their away match at Borussia Dortmund.

The spectators inside the sold-out Mercedes-Benz Arena witnessed a passionate, battling performance from Pellegrino Matarazzo’s men, who took the lead in the 12th minute through Sasa Kalajdzic, who initially missed his penalty before scoring from the subsequent corner.

Köln equalised in the second half when Anthony Modeste capitalised on an error by VfB goalkeeper Florian Müller. Stuttgart kept pushing with team spirit, fight and passion until the end, and were eventually rewarded in added time with Endo’s winning goal.

12’: From a corner, Kalajdzic – who had just missed a penalty – is in exactly the right place to head VfB in front.

59’: Müller drops a cross from Florian Kainz, allowing Modeste to make it 1-1.

90’+2: Hiroki Ito flicks on a corner to Endo, who’s perfectly placed at the far post to head in the decisive winner.

Wataru Endo: “The way the stadium exploded after the second goal was unbelievable. I couldn’t be happier. We achieved it together. The fans gave us incredible encouragement and helped us back once again. Thank you for the support.”

Head coach Pellegrino Matarazzo: “That was pure ecstasy, a wonderful moment, incredible. I’m so happy for the boys. You don’t forget moments like today.”