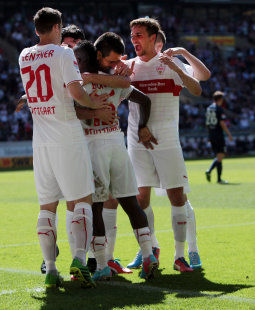 All square on final day

At the end of a tough campaign, VfB Stuttgart finished the Bundesliga’s anniversary 50th season in twelfth place. Bruno Labbadia’s men out in another determined performance and came from behind to take a 2-1 lead, but in the end VfB had to settle for a share of the spoils in a 2-2 draw with 1. FSV Mainz 05. The coach made two changes to his starting eleven from last weekend, with Gotoku Sakai and Shinji Okazaki coming in place of Tim Hoogland and Ibrahima Traoré. Before the game got underway, VfB president Gerd E. Mäuser, chairman Ulrich Ruf and Sport Manager Fredi Bobic bid an official farewell to Marc Ziegler, Federico Macheda, Felipe Lopes, Tim Hoogland and Mamadou Bah.

The visitors from Mainz took control of the early phases of the game, with VfB having difficulties in finding their way. With just three minutes played, Chinedu Ede fired over, under pressure from Serdar Tasci. Soon after, Andreas Ivanschitz went even closer, firing his shot against the underside of the bar. It took until the 16th minute, but then the visitors finally got their noses in front, with Nicolai Müller rounding Ulle and passing to the centre for Ede to slot into the empty net. 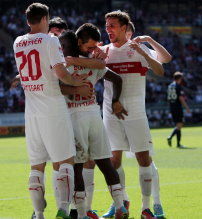 The Mainz goal served to shake VfB into action and the game became far more intense than expected for such a basically meaningless match. In the 18th minute, Vedad Ibisevic got on the end of a Maxim free-kick, but was unable to turn his header on goal. Just four minutes later, the VfB fans were off their seats and celebrating, when Okazaki fed a pass out to Martin Harnik, who fired towards the near post, where keeper Christian Wetklo could only turn the ball into his own net – 1-1. Labbadia’s men now had their tales up and duly took the lead, with Arthur Boka playing a one-two with Ibisevic, before slamming home to make it 2-1. Shortly before the break, Harnik went close again but, at the other end, Mainz went one better and levelled the score to make it 2-2 at half-time.

VfB striker Vedad Ibisevic: "Today was just as how we had planned it." Post match comments

The second period began in similar fashion to the first – with a chance for Mainz. Luckily for the hosts though, Georg Niedermeier was able to get a foot in and block from Ede. Radoslav Zabavnik was almost responsible for a second own-goal of the day, turning the ball against his own upright. On the hour mark, the home side thought they had taken the lead once again, but what would have been Vedad Ibisevic’s 16th goal of the season was deemed offside and didn’t count.

In the closing phases of the game, neither side was able to create anything truly telling and poor passing all around saw the match lull towards the end. On the sound of the final whistle, the visitors from Mainz could immediately turn their thoughts to a well earned summer break, but for VfB, the focus switches to the DFB-Cup final against FC Bayern Munich at the ‘Olympiastadium’ in Berlin on June 1st. The VfB players have a fortnight now to recharge the batteries and prepare for the clash with the Bundesliga champions.