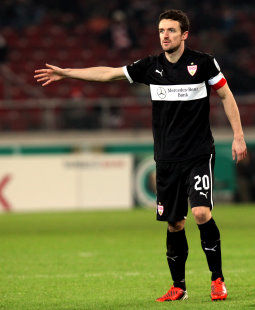 Christian Gentner signs on until 2016

VfB Stuttgart and Christian Gentner have extended their mutual contract, which would have expired at the end of the current season, by three years. The 27 year old signed a deal until 2016, which also includes the option of a one-year extension.

“Christian has played well over 200 games in the Bundesliga and is a very experienced professional. That experience is very good for our young team,” said Director of Sport Fredi Bobic, who added: “He has spent the bulk of his career at VfB, became a title winner here with the club in 2007 and identifies fully with VfB Stuttgart.” Gentner has made an “exceptional development” and is expected to play a “significant role” both sportingly as well as personally at the club in the future.

The deputy-captain himself is delighted about the coming years he will spend in the VfB colours: “VfB has a place in my heart. We have made a good start here and are far from being at the end of our development. I want to be a significant element of this team and do my bit in ensuring that we can establish ourselves at the very top level in the coming years,” stated Christian Gentner.