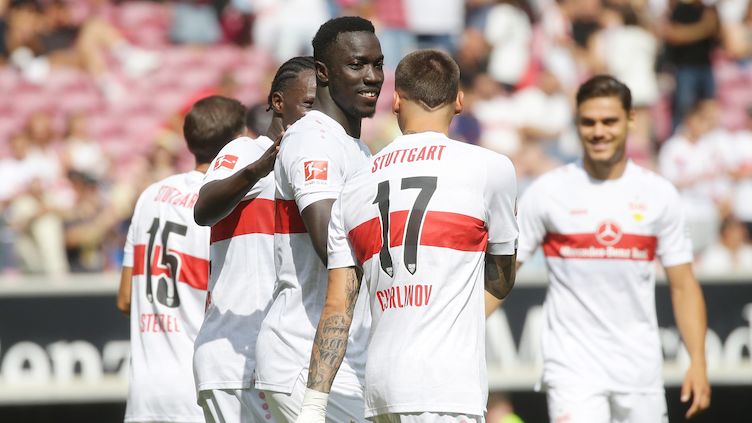 Ready for the off

Silas has continued working his way back to fitness in recent months after his shoulder injury, and he’s all set for Sunday’s home match against Leipzig.

“The team are on the right track,” Silas told VfB-TV. That’s as true for the squad as a whole as it is for the 23-year-old himself. The Congolese has battled serious injury problems in the past one and a half years. First a cruciate ligament tear sidelined him for a number of months, and then just a short while later, in February, he injured his shoulder. The 2021/22 season, like the one before it, ended early for him.

Silas had to fight back again – which, as you can see now, he’s done successfully. The forward completed all of pre-season with his teammates. “I feel good,” he said. “Pre-season has gone well. It was important for me to be back in full training. I did a lot of individual work during the summer break, which helped me. I was able to make physical progress.“

In the final pre-season friendly against Valencia, Silas was also back among the goals in a 5-2 win. “I’d missed that a lot,” he described. “It felt good to score in our stadium in front of our fans. Overall the friendlies have given us confidence, and the cup game was a success to. We’re ready for the first league game.” For VfB that comes on Sunday, when RB Leipzig visit the Mercedes-Benz Arena (kick-off 15:30 CEST). “They’re difficult opponents to start with but we’ll try everything to win the match,” said Silas.