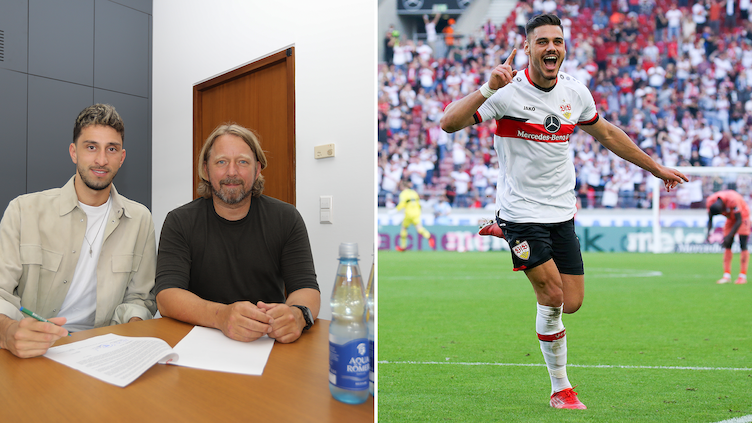 Atakan Karazor and Konstantinos Mavropanos have committed their long-term futures to VfB.

VfB’s plans for the 2022/23 campaign are already in full swing. Atakan Karazor, whose previous contract was due to expire on 30 June 2023, has signed a three-year extension with the club through to 30 June 2026. The holding midfielder was once again a vital cog in Pellegrino Matarazzo’s side this season, making 24 appearances in the Bundesliga and one in the DFB Cup. The 25-year-old, who joined VfB in summer 2019, has played 43 top-flight games for the club to date, not to mention 23 matches in Bundesliga 2 and three in the cup.

VfB’s top-flight survival has also triggered a permanent move for Konstantinos Mavropanos, as agreed in his original loan deal from Arsenal. The Greek international, who scored four league goals for VfB this season, is now tied to the club until 30 June 2025. Mavropanos has also established himself in the Greek national team during his time in Stuttgart, making nine appearances since his debut in March 2021.

“In addition to his qualities as a footballer, Ata is an important part of our team as a person and as a leader. Dinos brings an enormous amount of strength and willpower to our game and has proven himself at a high level physically. Both have made a clear commitment to VfB and our journey. We’re really looking forward to continuing to work together.”

“I’ve felt really happy at VfB from day one. We were promoted to the Bundesliga together and have now maintained our top-flight status twice in succession. My sincere thanks go to the management for the trust they have placed in me with this contract extension.”

“I’ve always given my best and will continue to give my best for this great club. The trust of the management and the affection of the fans in Stuttgart serve as a great motivation for me.”