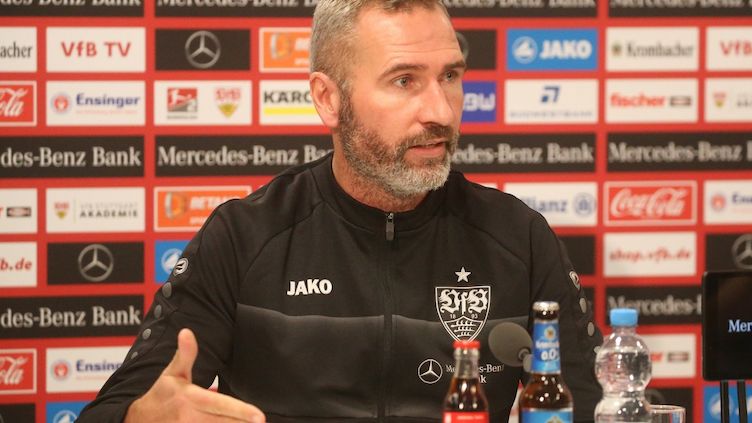 “We have to be patient”

VfB are looking to make it three wins in a row when they travel to VfL Osnabrück. Tim Walter believes his team are making good strides but remain a work in progress.

Tim Walter had never experienced such an introduction to a press conference in his coaching career: as the VfB head coach walked into the media room at the club’s campus on Friday morning, he was serenaded by the journalists with an a cappella song in honour of his 44th birthday. He has little time to celebrate, though, with the squad making their way to Osnabrück today.

With 16,000 tickets sold, the Bremer Brücke stadium is sold out and emotions are set to be high. “It’s a small stadium so it’s very intimate,” commented Walter. “We’re used to being the favourites. We know what we’re in for and what we’re up against. We have to go about our work and be patient.”
With one day to go until the game, Walter was tight-lipped as to which 11 players will take to the field, confirming just two positions: Holger Badstuber will return in defence following his suspension and Gonzalo Castro will start in midfield.

Irrespective of the upcoming encounter and the current league standings, Walter believes his team are making good progress but are not at the end of their development process yet. “Overall, we need to do everything a little bit better still,” he said. “The number one priority is that we do everything together, both attacking and defending. We need to be a tad more consistent and compact.”

Should his team take another small step forward at Osnabrück, it would give the birthday boy double cause for celebration.