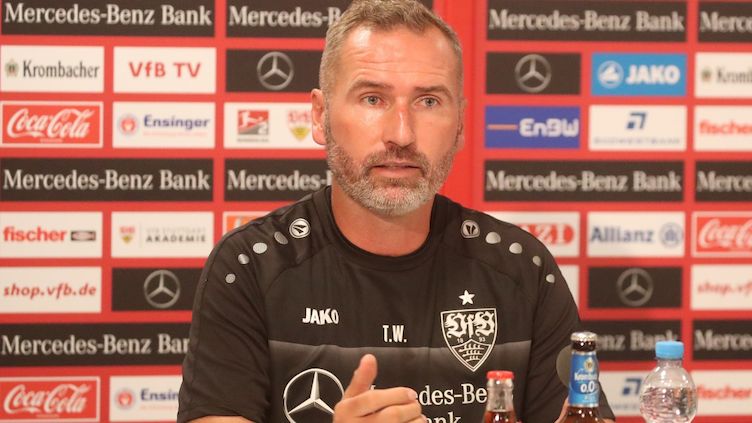 “We need maximum intensity and conviction”

Ahead of the top-of-the-table clash away to Hamburger SV on Saturday (kick-off 13:00 CEST), head coach Tim Walter has challenged his charges to “summon all of their energy and leave it all out on the pitch”, in order to continue their impressive away form this season.

Ahead of the top-of-the-table clash away to Hamburger SV on Saturday (kick-off 13:00 CEST), head coach Tim Walter has challenged his charges to “summon all of their energy and leave it all out on the pitch”, in order to continue their impressive away form this season.

VfB are unbeaten on the road so far in 2019/20 and are now eager to carry on where they left off on their last two away trips, which ended in victories over fellow high-fliers Regensburg and Bielefeld. However, in order to do so, the Cannstatt boys must first overcome what is, on paper at least, their toughest task of the season to date.

Dieter Hecking’s Hamburg side are still unbeaten at the Volksparkstadion, which will be packed to capacity this weekend, and they have the best home record in Bundesliga 2 this term. They have won their four most recent home games, during which they have scored ten goals without reply.

As such, the sense of anticipation going into the fixture is increasingly tangible in the VfB camp. “Obviously we’re really looking forward to playing there and we’ll be approaching the game with maximum intensity and conviction,” said Walter ahead of the first of two meetings with Hamburg in the space of three days.

The second assignment against HSV, in the DFB Cup second round on Tuesday (kick-off 18:30 CET), is not something VfB are focusing on yet, though. “We’re only looking at our next game on Saturday and are continuing with our positive approach – our last two results won’t change that at all,” said the 43-year-old, who nevertheless urged his side to show an improved display this weekend.

“The manner in which we present ourselves is important,” Walter said. “We need to enjoy what we’re doing. It’s vital that we don’t lose that sense of playfulness and ease. There’s room for improvement in every aspect of our game, not only in front of goal. We’re carving out chances in the first place and our hard work creates opportunities.”

Walter will decide on a replacement for the suspended centre-back after the team’s final training session on Friday: “We’ll miss Holger’s experience, but in Maxime Awoudja and Nathaniel Phillips we have two boys who can play just as well.”