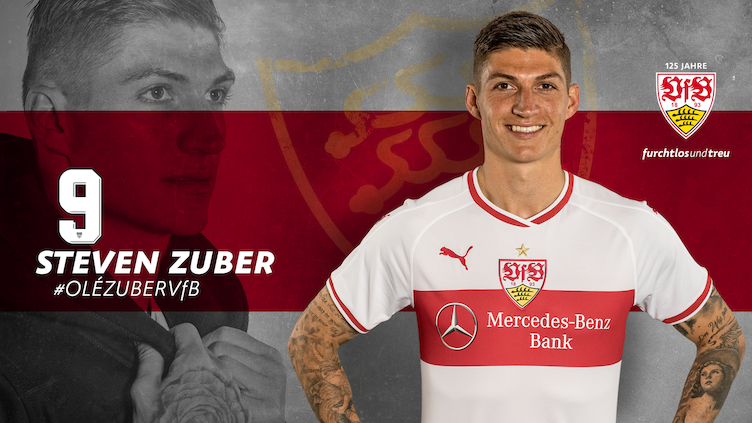 Switzerland international Steven Zuber has joined VfB Stuttgart on loan from TSG Hoffenheim for the remainder of the season.

Zuber has made 82 Bundesliga appearances since arriving at Hoffenheim in 2014, scoring seven goals and returning a further eight assists. Nine of those top-flight outings have come this season.

The 27-year-old also possesses plenty of experience on the international stage. As well as playing in the UEFA Champions League with Hoffenheim and former club CSKA Moskva, Zuber has won 21 Switzerland caps and featured at the 2018 FIFA World Cup in Russia.

The winger, who will wear the No. 9 shirt for VfB, picked up a minor ankle injury in Hoffenheim training on Tuesday. As a result, he will not travel to VfB’s winter training camp in La Manga and will instead link up with his new team-mates in Stuttgart next week.

VfB Stuttgart head of sport Michael Reschke: "We're very happy to have signed Steven, another player with an outstanding mentality. With his power and determination, he will add to our attack in the second half of the season. We would like to thank TSG Hoffenheim for the cooperative discussions during the deal."

Steven Zuber: "I had good conversations with head coach Markus Weinzierl and the leading figures at the club. From the very first second they convinced me about making the move to VfB Stuttgart. Our aim is to stay in the Bundesliga – we want to achieve that as quickly as possible. I want to play my part in celebrating as many wins as possible with the brilliant fans in the second half of the season. I'm looking forward to the challenge at VfB and can't wait to meet my new team-mates and get started."